Jiten Dev was a composer of highest caliber. From 1969 to 1974, I learnt music from him. Those who were closely associated with him got to learn quite a few things from him. Reminiscing about his times is actually about relishing the memory of his brilliant compositions. During that phase, the recordings of HMV were done at the upper floor of Bishweshwar Sharma’s residence. I sang two compositions of Jiten da at that time. The first one was Khela Ghoroloi Kio Nu Ahila, the taal being Daadra with Lakhshahira Das providing a magical touch with the lyrics. Once Dilip Sharma asked me who the lyricist was. “Lakhshahira Das”, I replied. Then he said, “I guess no need to ask about the composer. Who else has the competence other than Jiten Dev, to craft such an exuberant piece of sheer musical excellence”. The other one was, Maajoni Mur Okonmani. Lyricist Idris Ali visited me one day, my daughter being just two and half years old then. “Ah, I did not bring anything for her, next time will send something for sure”, he hastily added. He was true to his words and after a few days sent these very lines of the aforementioned song, with the lyrics surpassing all bounds of poignancy. Jiten Da composed a lullaby-like tune to suit the words, with innovative use of guitar and flute. Surjya Goswami accomapanied him on Tabla. The song had a mention about many okonmanis (toddlers)- Dudulmoni, Ainu, Niyor. Dudulmoni being the son of Tafajjul Ali, Ainu was the daughter of Nabakanta Baruah and Niyor, Birendranath Datta’s son. This melodious gift from the veteran songsmith worked as a perfect lullaby for my daughter. 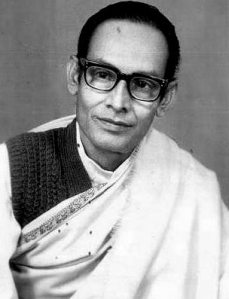 In 1971, I had the opportunity to record some more compositions by Jiten da at HMV. Dijendra Mohan Sharma provided lyrics for Hoitu Milibo Khuje Dukhon Nodi, Lakshahira Baideu wrote two songs, Mon Kiba Kio Kore and Jiri Jiri Botah Jakor Modhu Gunjoron, another one by Deben Sharma,- Duloni Lagise. In regard to his music, Jiten da was an out and out perfectionist. Those who knew him well used to joke, “When it comes to music, satisfaction doesn’t come easily if you are with Jiten da.” He used to reply in a jovial spirit, “Satisfaction kills the desire move further ahead. The day you are satisfied with yourself, you lose all the urge to come up with better outputs.” He was like a bag of jewels, the more you look for, the more you discover. While recording the song Jiri Jiri, he wanted me to come up with the same effect of fluttering of Coconut leaves, which the phrase Jiri  Jiri resonates.
One composition that was most close to his heart was Xondhiar Akashot Bogoli Ure, probably sung by Minakshi Devi for Xuror Xorai. Later while recording it for HMV, she was not there. Jiten Da asked me to go for it. As Minakshi had already set a high standard by pouring all her excellence into it, I could not gather courage to give a shot. I was not sure whether I will be able to do justice to his prodigious composition. At the end, Tulika had to sing it. During that period, many of us including Tulika Senapati, Anima Borthakur, Bandana Dutta, Jugabrata Dutta used to learn music under him. That very composition contained traces of melodies from Biyanam to Bodo folk music, giving it quite an eclectic edge. While we were learning that song, he said, “Xondhiar Akashot Bogoli Ure, this ure (fly) should be like the high flight of a crane, not like the one of a sparrow. In the same manner, Aire Ghoroloi Monote Pore, this monote(remembering) should evoke a spirit of melancholy, in the perfect way”. ‘Bahore Agote Rodali Dule’ had a tinge of Bodo folk music in the tone colour, which was required to be sung by transcending the rhythm, as he insisted. “Aire Kotha Te Senehor Dhou Oh, Deutar Kotha Te Boroxe Mou”- sing this ‘Oh’ like weeping, while providing a space in the rhythm.” He taught us all these things one by one, with dedication, being the perfectionist he was.
In addition to his expertise in melodious compositions, he had a fair share of expertise in Tabla also. In 1974, I had the opportunity to sing another composition by Jiten da, Oh Madhavi, Bonobenu Kio Bojala, with Idris Ali being the person behind the lyrics. Then again another one written by Lakshahira Baideu, Sokupani Khini Dhaki Tholu Aai, being a perfect amalgamation of patches of classical and folk music. The lyrics were immensely poignant-

Another incident is worthy of being mentioned here. Once due to having some perplexities regarding the imbalance between the melody and lyrics of a composition, we went to Nirmalprabha Bordoloi’s place, seeking assistance. After helping us to sort out the problem, she asked me to sing something. I sang a composition by Jiten da only, with Baideu herself being the person behind the lyrics. Eiya Je Gobhir Nixaa, a haunting number dealing with the pain and helplessness of a forsaken Radha. While I was singing it, baideu broke down in tears.
Every song, every composition of his has a story, has many anecdotes behind them. There are other composition of him as well where I have provided my vocals, Xola Xolaj Khuj, Klanto Ratir Tora, Xuwornor Dolisai Ga Jur Nepelai, Xokolure Montu Najanu Mur mon Hole Bakhoruwa, Fulibone Mone Mone, Mon Bor Urunga, Tumiyei Mur Hridoy Bahi, Konyakumari Moi and many more.
He was extremely cautious in regard to melodies and used to put painstaking effort in each one of his compositions. He was teaching, shaping and moulding many future artistes one by one. Even now, whenever he visits my memory, I sing this number of him,

This was another instance of his brilliant pieces of work, with lyrics by Nirmalprabha Baideu and vocals by me.

This project is totally dedicated to make an archive of Assamese oldies. Use of the songs here is not intended as a copyright infringement on any of the artist or any other entity’s copyrighted material. As totally a non- commercial project, all the music present in this site is for Cultural Promotion and Information. If you believe that any material found on our Site has been used in a manner that constitutes infringement of your copyrighted work, please provide written notice to our Email ID info@enajori.com that includes the following information: (1) the signature of the owner or a person authorized to act on behalf of the owner of the Work that is allegedly infringed; (2) identification of the copyrighted work claimed to have been infringed; (3) a description of where the infringing material is located on the Site; (4) your contact information i.e. address, telephone number, and email address; (5) a statement by you that you have a good faith belief that the disputed use is not authorized by the copyright owner, its agent, or the law; and (6) a statement by you that the information in your notice is accurate and that you are the copyright owner or authorized to act on the copyright owner’s behalf. Please provide legal proof of your right to demand removal. If verified, material will be removed immediately unless permission is given for its use.